Edinburgh was on my short list of cities to visit while we are in Europe. After getting London, Paris and Rome crossed off the list (sort of - we really need to return to all three), we cracked open the maps and plotted our next adventure. Edinburgh was an easy choice due to its proximity to Dublin, 352 km - almost exactly the distance between Los Angeles and Las Vegas.

We landed on a cold, overcast Thursday morning. If I had not been able to see our cab driver and had only heard him, I’d have sworn he was Sean Connery. He turned out to be a nice guy and gave us a tour on the way to our hotel, pointing out the national rugby stadium and other landmarks. After hearing we live in Ireland, he and I talked Guinness and he eventually recommended the popular local beer, Belhaven’s Best. 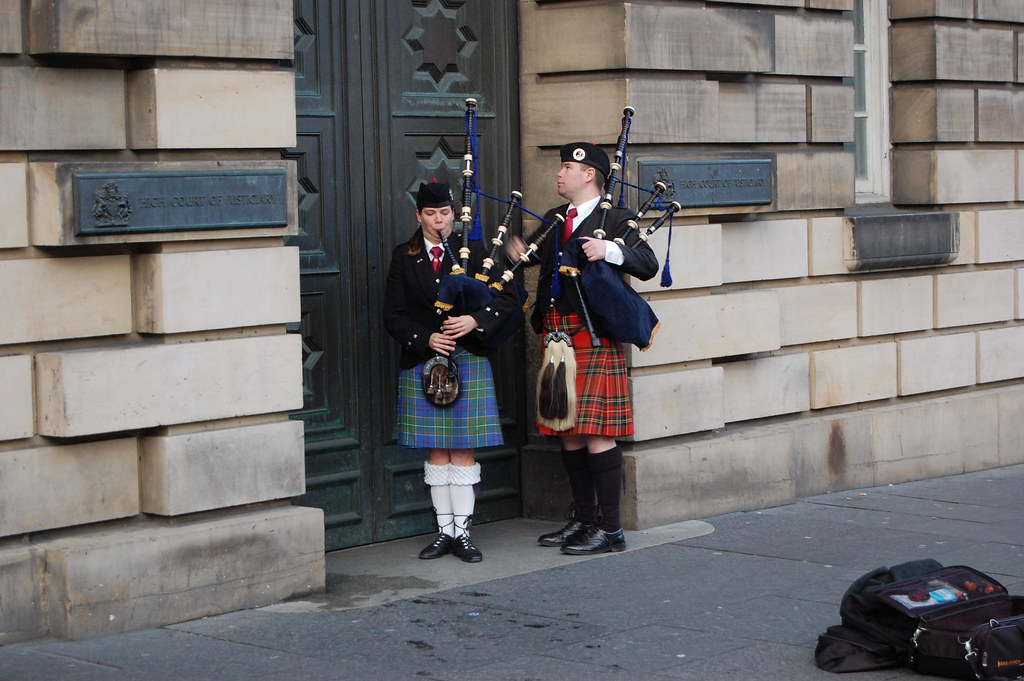 Hotel found and bags deposited, we set out to wander. Edinburgh is a vertical city. We wandered up and down streets, getting our bearings until we found the Royal Mile, the road between the Holyrood Palace and Edinburgh Castle.

Every major European city seems to have the same “hop on, hop off” double decker bus tours. We generally buy tickets for these pretty early in a trip for a number of reasons:

Edinburgh’s version has four different routes for one low price. We braved the cold and sat up top.

The topology and architecture of the city is impressive. Castle rock and Arthur’s Seat were crags formed by glaciers that give the landscape drama. On top of this are 4500 historical, “listed” buildings featuring architectural styles from medieval to modern. St. Gile’s Cathedral, the Scottish Parliament building. Tons of statues and monuments including The Scott Monument. 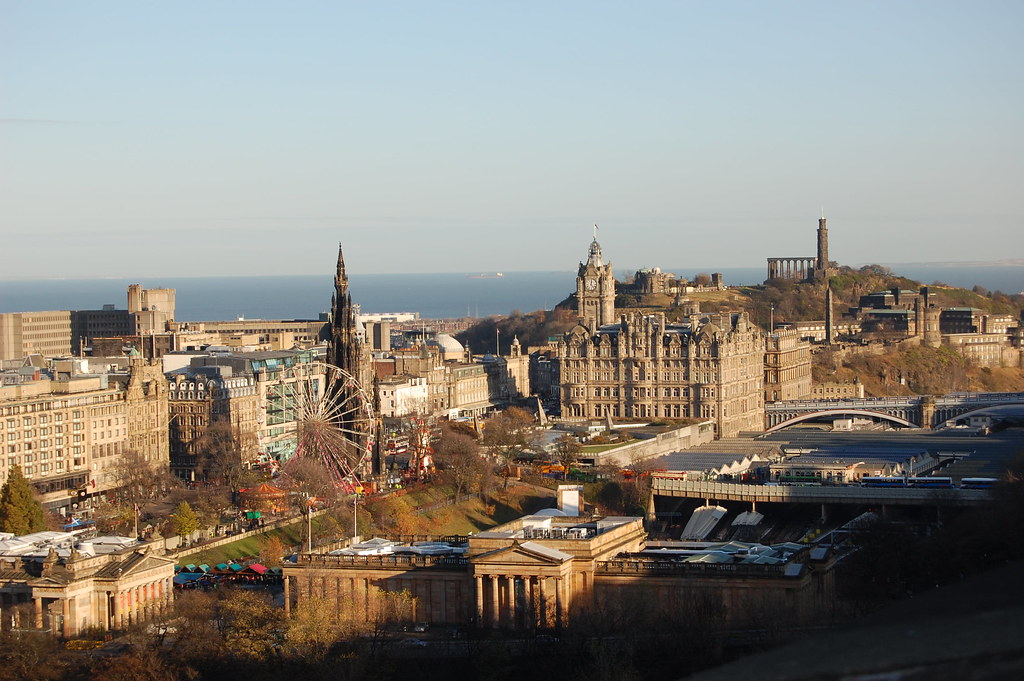 Holyrood Palace is the Queen’s residence in Scotland. We took the audio tour. Facty liked that she was in a room where Princess Diana had eaten. Meh. The ruins of the adjoining 12th century abbey were more my speed.

That night, on the recommendation of the hotel, we walked to a small Italian restaurant named Frankie’s. While the boy is picky eater, we are usually fine with Italian, where he can get a pizza. Frankie’s has no pizza on the menu. What Frankie’s does have is the best service we could have asked for when faced with an overtired autistic boy who just learned there is nothing for him on the menu. Our host immediately engaged the kids, brought over markers, paper, books to keep both kids busy. Seeing the trouble with the lack of pizza, she sat down next to Jelly and negotiated something with him. She then took him behind the counter to pick his own drink. She turned a problem into a wonderful evening. Add to that great wine and well done food. Unlikely as it is, if you are ever near Bread Street in Tollcross, make sure you visit Frankie’s.

Friday, we stormed Edinburgh Castle. Our tour guide was a dramatic storyteller and kept us riveted (and laughing) and the views of the city from Castle Rock where great on the cold, crisp morning. Following the tour we went through an interesting exhibit on prisoners of war in the Castle and visited the Royal Scots museum. For weeks leading up to this trip, Jelly was worked up to go “research his ancestors.” In the gift shop of the castle, he wanted to buy everything with our family name on it. We caved and bought him a couple of touristy souvenirs. 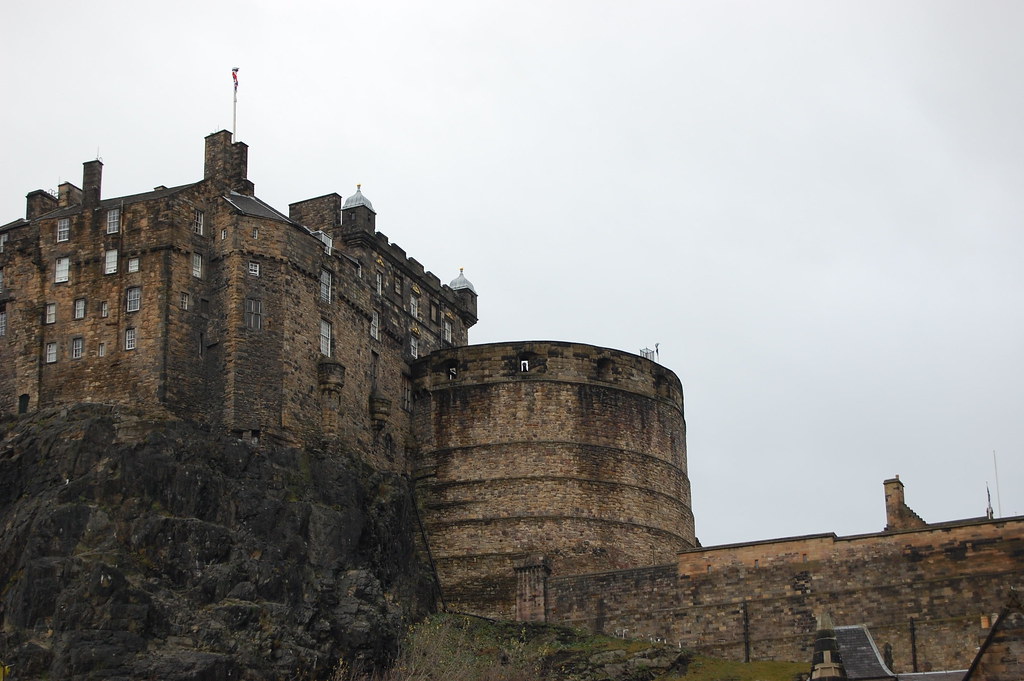 In the afternoon, we went back to Holyrood. Across from the Palace and the Parliament building, Our Dynamic Earth is a science museum for children that takes them back millions of years to the beginnings of the earth and shows them the geological history of the planet. They have a cold room containing an SUV-sized chunk of actual glacier, and a room with a tropical rain forest simulation. Birdy enjoyed the hot chocolate. 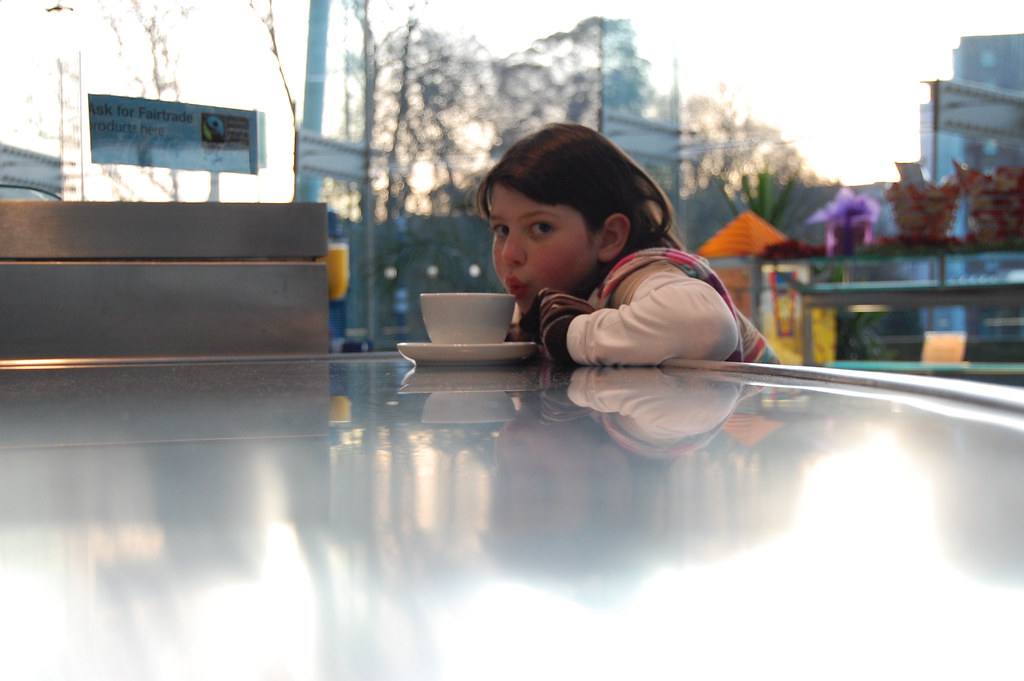 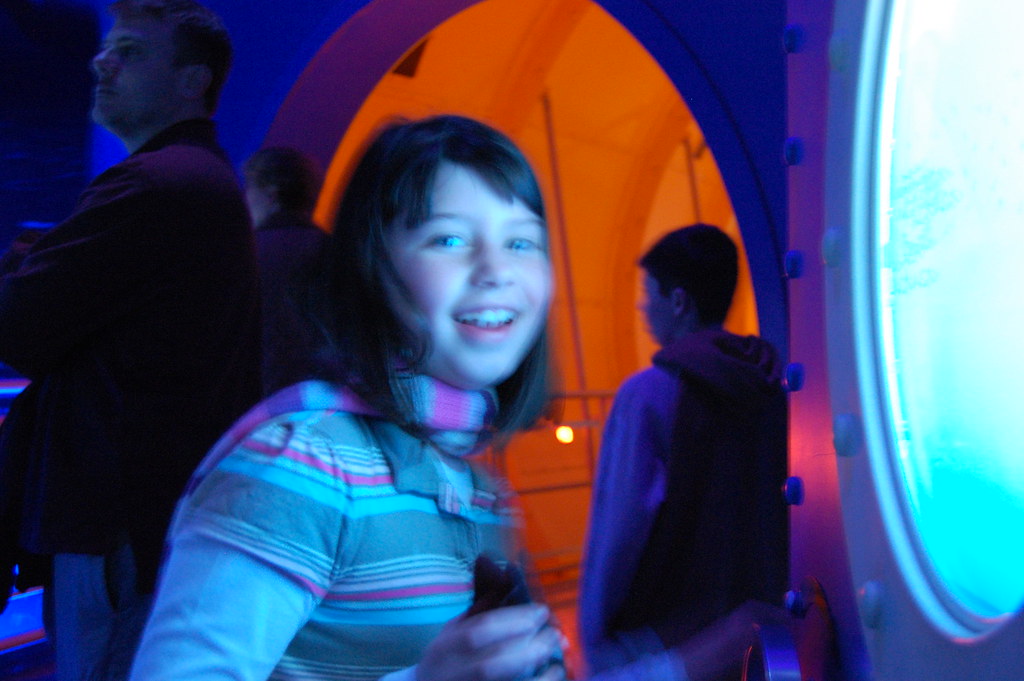 On the way back to the hotel we found an amazing shop selling whisky, gin, vodka, liqueurs, wine, and oils - most infused with unusual flavors. All were bottled directly on the premises and everything was available to taste. I found a barrel of 14 year old single malt scotch and, after reading the description and taking a wee taste, had to bring 200ml home. 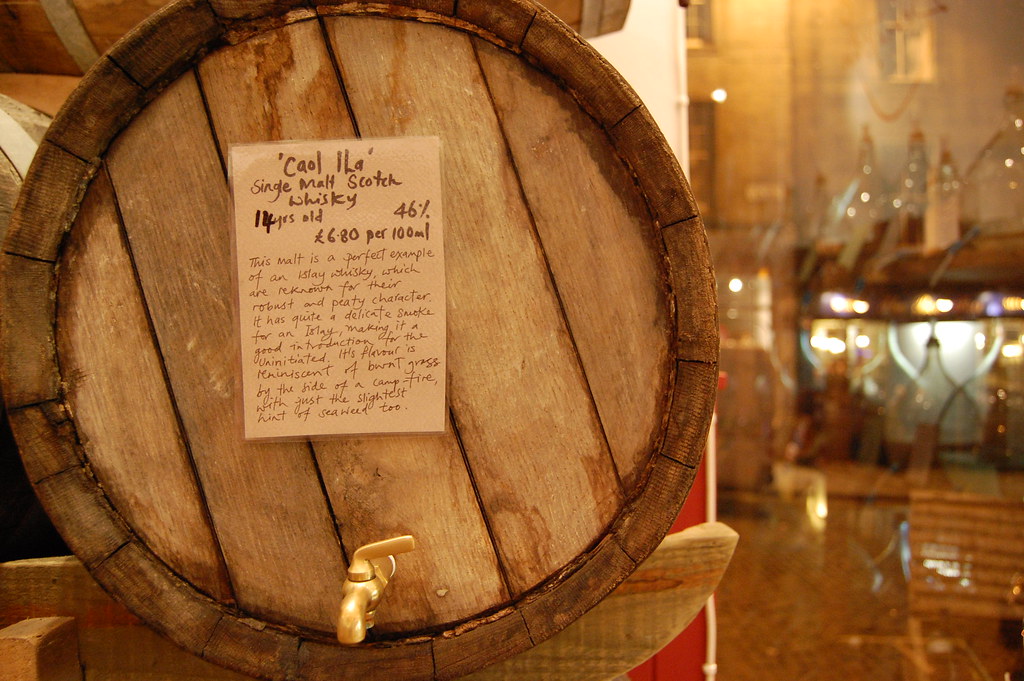 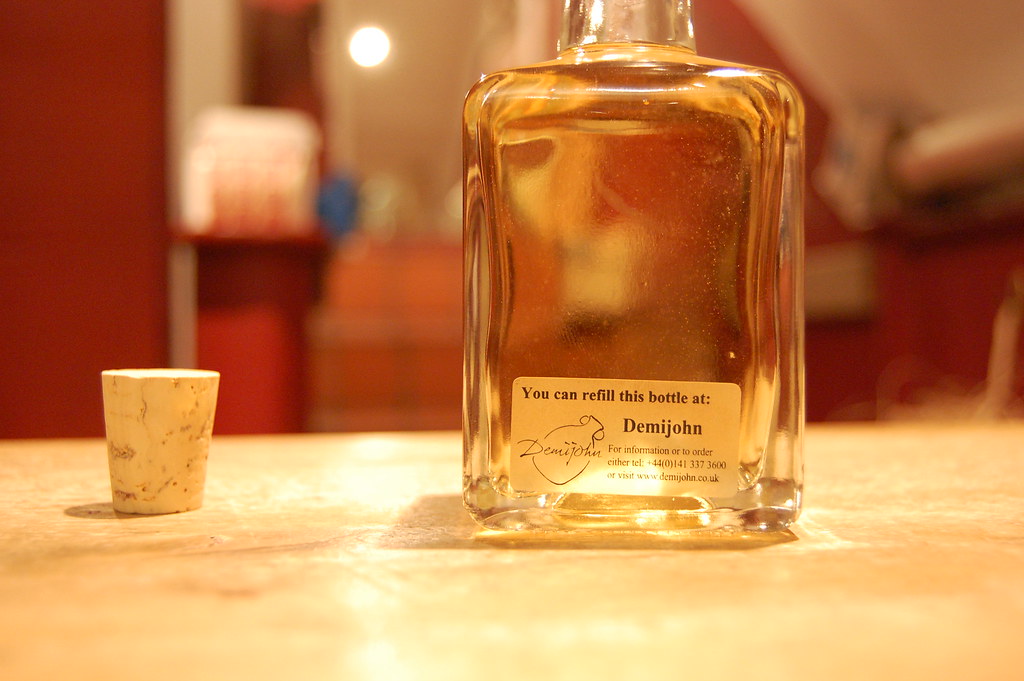 On Saturday, we piled into a van with about 15 others and took a tour into the Highlands. The day started in Glenturret, which claims to get Scotland’s oldest working distillery. It is also owned by the company that owns the Famous Grouse, Macallan, Highland Park, Cutty Sark, etc., so much of the tour was a long infomercial for the company. There was a tasting at the end of the tour. Note that the two American college kids on the tour, when presented with the taster, expertly pounded the shot just like they were taught at at every Friday night kegger - much to the amusement of the tour guide. Also, our guide put a drink in front of everyone, including the two kids!?! Bonus points for him as he then slid the kids drinks over to dad.

So, after 4 shots of Scotch (including the Macallan I bought after lunch) it was about 1pm and time to get back on the bus. We were headed for the little town of Aberfeldy, on the River Tay.

The town is most famous for a Robert Burns poem, The Birks of Aberfeldy. And our mission that afternoon was to hike into the Pheallaig Burn and gaze upon the birch trees and the Falls of Moness. The hike was advertised as requiring “avergage fitness”, and the tour guide dropped off one of the elderly ladies and her son in town before heading to the entrance to the Birks.

Now, it may have been the cold, damp weather. It may have been that my no-time-for-exercise, life-in-front-of-computer fitness was slightly less than “average”. I suspect that it may have had something to do with the 4 shots of Scotch I’d had 30 minutes earlier. Whatever the reason, The Birks of Aberfeldy kicked me right in the ass.

We started as a group of 15 or so. Very quickly, we were steeply ascending. Everyone walked right away from me and I was left in the company of the 65 year old Indian man who was stopping to smoke every 800 meters. Don’t get me wrong, he was very pleasant and we spoke about how he would go on much longer, more strenuous walks back home. Meanwhile, I was starting to wonder if the route was going to double back, and could I please wait here until everyone returned. But I soldiered on. The kids came back every so often to check on me. The guide stopped once or twice along the way to allow us to catch up.

The place was beautiful. I mean breathtaking. A spot along the hike is marked with a plaque marking where Burns sat on his trips in the Birks. The rain started to gently fall around the birch trees. The moss was thick on the tree trunks. It was deathly quiet, save the low roar of the waterfall.

…And the mild, under-his-breath cursing of a buzzed, slightly below-average-fitness, geek.

We eventually made it all the way back (and up, did i mention up?) to the waterfall, where we rested for a few minutes. The trip back was downhill. The winter sun sets remarkably early and it was starting to get just a little bit dark. Birdy and I held hands most of the way over the wet leaves. It started to rain a little harder, but not too hard. It was about my favorite 30 minutes of the entire trip.

We got back on the bus and headed for Dunkeld for hot chocolate and cappuccino. 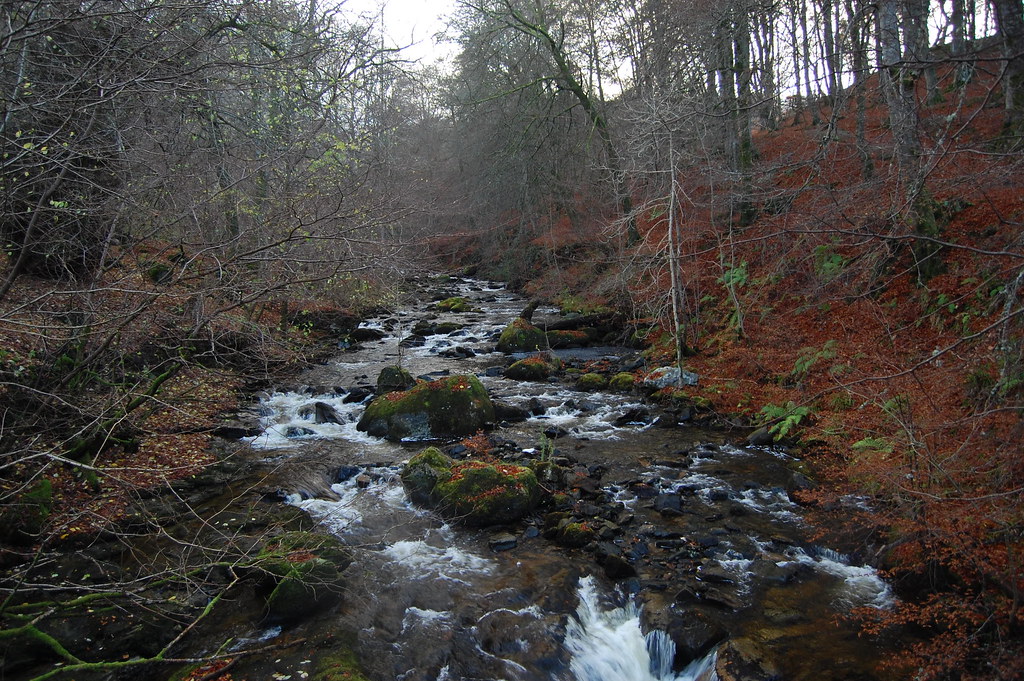 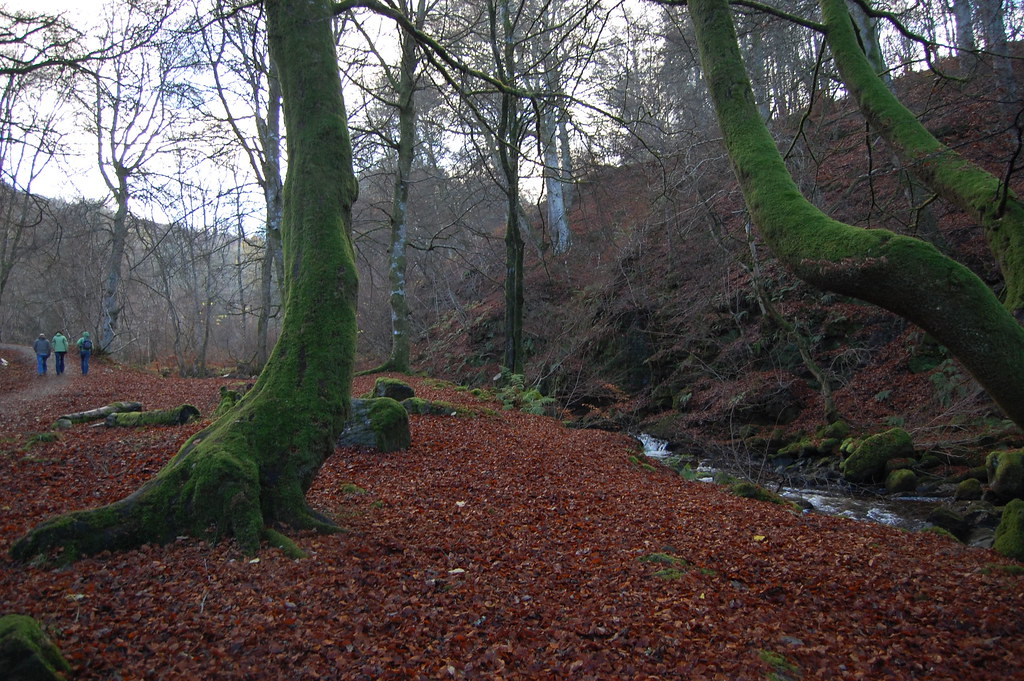 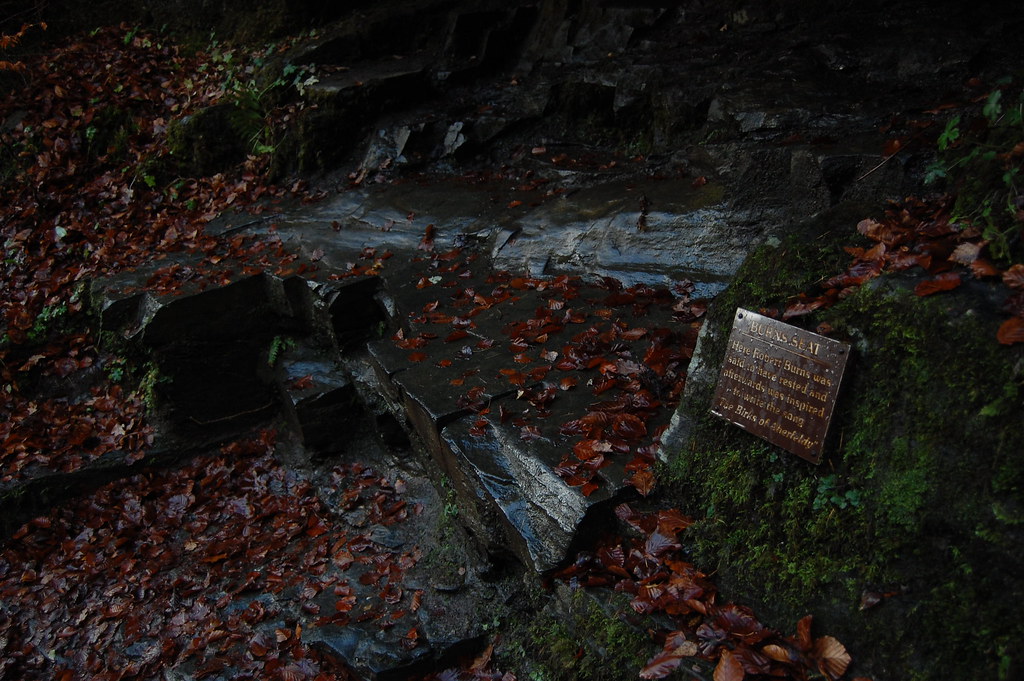 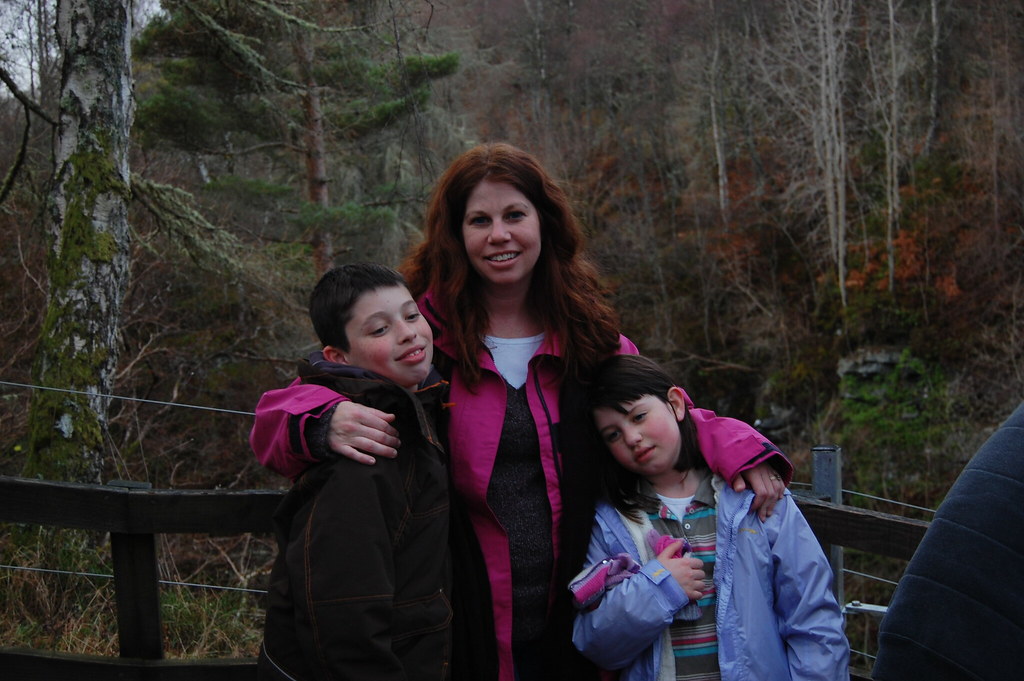 On our last day, Sunday, we caught a city bus out to Roslin, a small town 15 miles or so from the center of Edinburgh. Facty wanted to see the chapel because it had something to do with the Da Vinci Code. My expectations were not high. They were further lowered when we arrived at 10:30am to find that services were going on (oh yeah, Sunday) and the chapel was not available to tourists until noon. We wandered a bit around the chapel and found a small path that seemed to go nowhere. Following it, we worked our way down a hill and found a narrow road leading to some ruins and a house. This turned out to be Roslin Castle. It was in a beautiful glen and we spent the next 2 hours exploring the trails around the castle, chapel and cemetary. In the cemetary, Jelly and I finally found that ”ancestor” he had been looking for the entire trip. 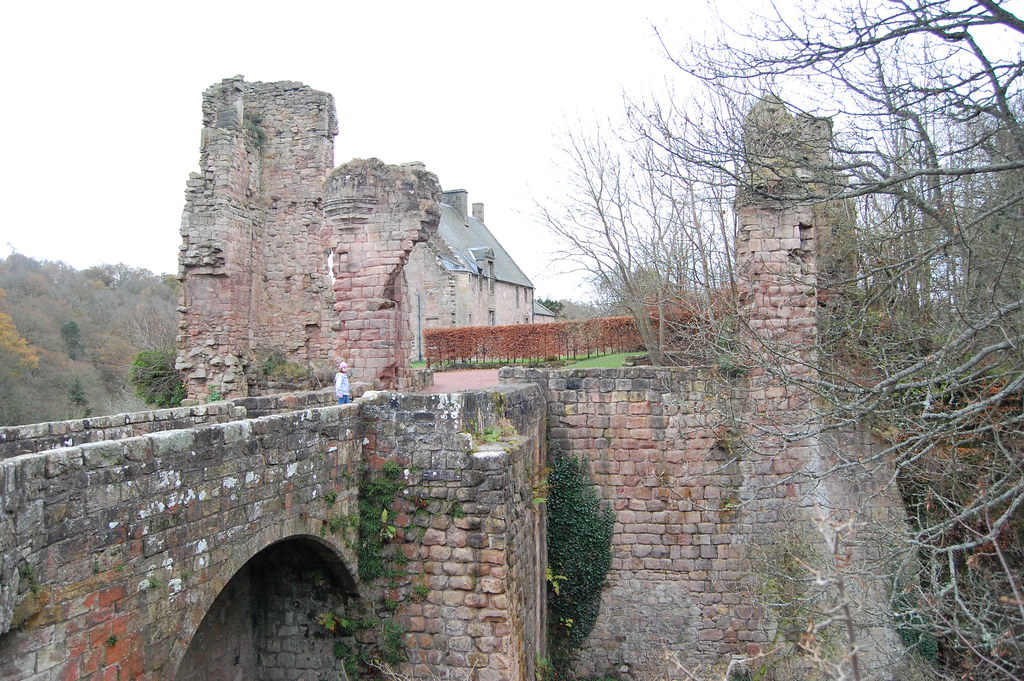 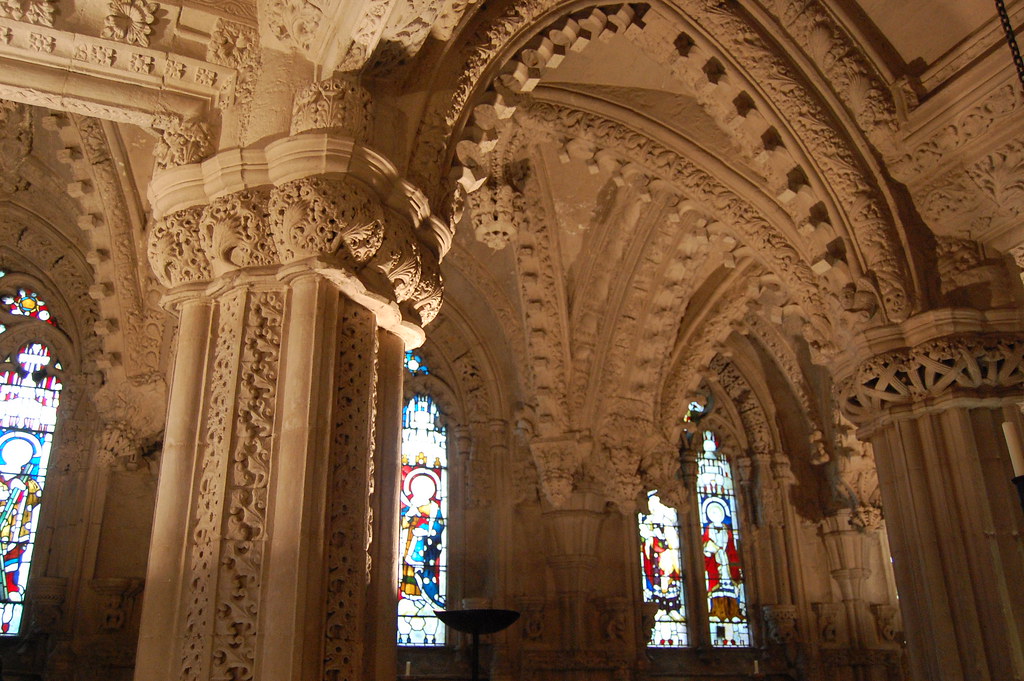 Circling back to the chapel, we went in with about 20 other Da Vinci Code fans. I’m not being fair - it was an interesting church, mostly due to the unusual symbols referencing Templar and Masonic themes. Each wall, corner and column has a strange symbol and/or accompanying story. But the real find was the castle and glen that surrounded it. 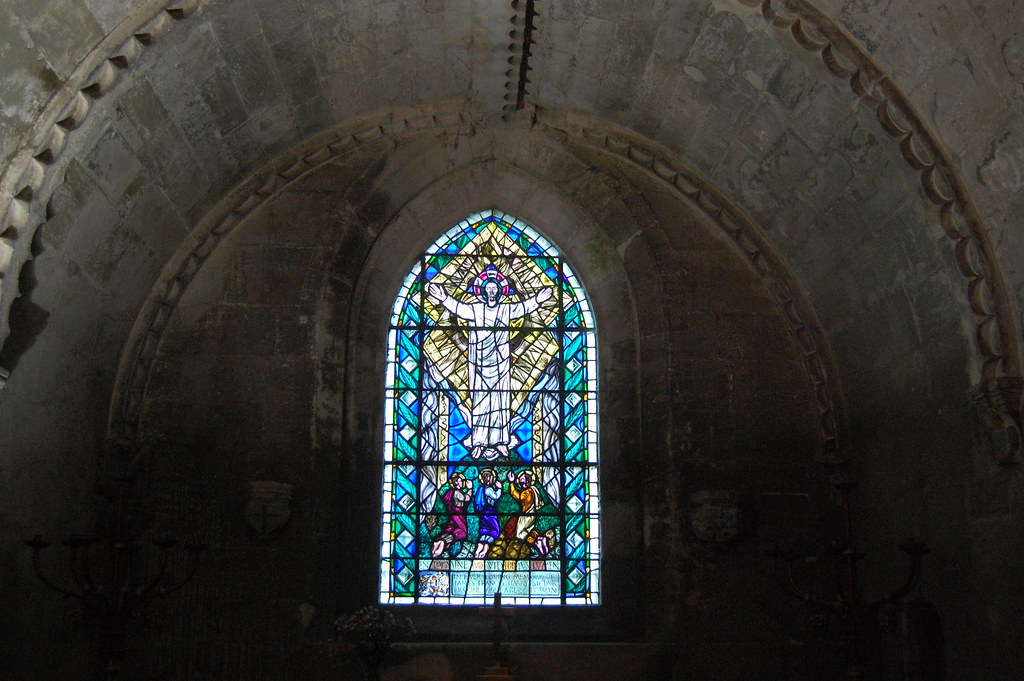 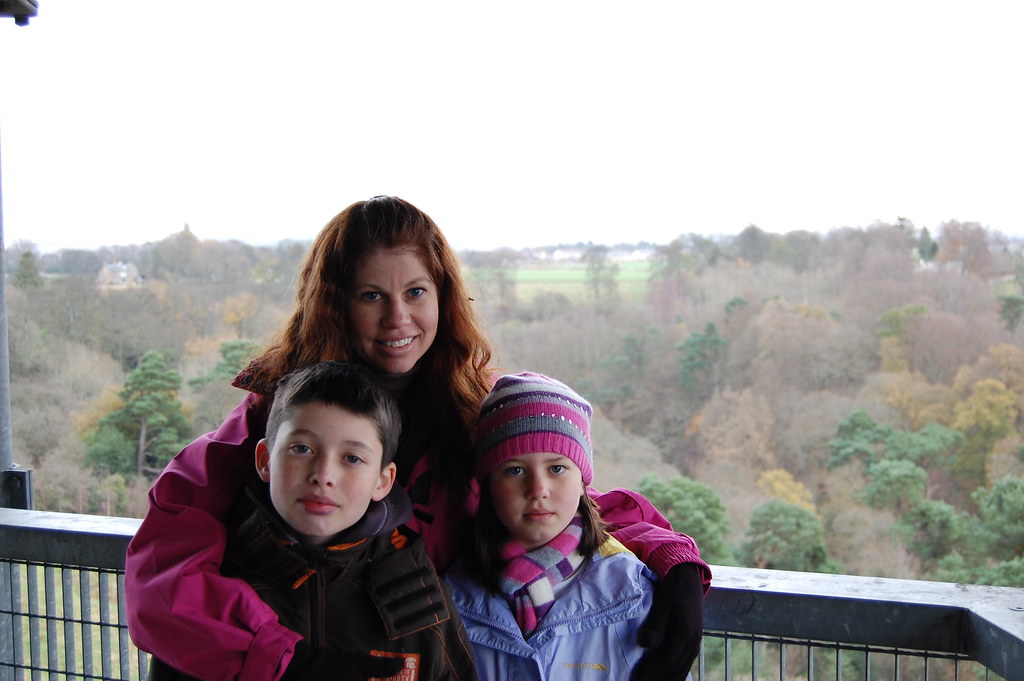 Yes, Facty roped me into one. Strange, but no pictures.